Recently, a communications consultant told me how the big four consultancy company leading her organisation’s transformation chose to bring in their own storyteller to identify and manage core purpose messaging. She was frustrated that she then had to re-write what he came up with. She isn’t the only one left frustrated by that experience.

The business world is buzzing about storytelling. In 2017, 570,000 marketers listed Storytelling as a skill on LinkedIn, compared to zero – zilch – in 2010. I now hear story talked about like  smartphones, because ‘everyone has one’.

Stories may help us shape identity, but the business of storytelling should be highly regarded. It’s a deep craft, a tool to help us make sense of the world. Perhaps that’s why we believe we innately know how stories work? They’ve been with us since fire and have adapted to a world in which they can be as compelling in a three-hour film as in a character-limited tweet.

Aristotle taught us that leaders have three persuasion tools at their disposal:

I’m on a mission to encourage better quality storytelling in organisations. To that end, here are TEN questions you should ask anyone who says they’re a Storyteller, before you let them anywhere near your business:

1. Is this a STORY or a narrative?

This is important. Only a story can change mind-sets because they’re value-charged and progressive. McKee and Gerace describe narratives as ‘flat, bland, repetitive and boring recitations of events.’ Sound familiar?

I like to think of a narrative as something on a grand scale, unfolding over time; the ‘bigger picture’ or the sector-wide context. In retail, omni-channel is a narrative. Story brings that to life in a meaningful way, having a beginning, middle and end (Three Act Structure) and leaving us with learning and insight.

2. Should the STORY be about people?

Unquestionably! Any journalist will tell you that a news story won’t make the cut unless it has human interest at its heart. All stories have a protagonist (hero) striving for their (internal) object of desire. This is powerful because mirror neurons in our brains allow us to feel what others experience as if it’s happening to us.

Inspirational business leaders like Steve Jobs understand the power of the mirror experience to change mindsets and prompt action.

Every story has a hero. In business stories, typically it depends on the type of company:

The point of a story is to create empathy between the audience and the hero. This is challenging when dealing with an inanimate object, so there must be a core value ascribed that helps bring the connection to life.

4. Should we avoid anything negative?

No. McKee calls it negaphobia – the tendency in business to push only positive messages, for fear of reputational impact. The problem described should not be one of the company’s creation but even that can be turned to advantage (KFC). Ideally, the issue should affect lots of people and the company have a unique solution.

Polarity (the flow from negative to positive) is vital in a story. It’s where the energy comes from. It keeps people hooked and helps them stay until the end for delivery of the all-important message.

5. Does the STORY have to work inside and out?

Absolutely! Your story should point to a core purpose, a fundamental truth about who you are and why you’re in business. It should encompass both sides of the reputation/culture coin. According to McKinsey, it should crystallise the most significant, game changing part of your strategy; that part that is hardest to do.

And it should come to life along a golden thread that connects your internal and external communications; through all your channels in your storyworld.

6. Can the STORY be changed?

It should evolve (for example, as a change story) but stay true to a master story. That is why it’s so important to invest time in story creation and collaborate to agree how it should be told. That’s the role of leadership, together with the marketing and communications teams.

Using proof points brings your story to life. Use data, as well as visual and written storytelling. This creates a fresh vibe for businesses going through transformational change or wanting to highlight a particular milestone on a growth trajectory.

7. How do you make the STORY stick?

By telling it, consistently across all channels. According to Gartner, 96% of organisations are in some form of transformation. Yet less than one in three of these change programmes is successful.

Unlike a campaign, which is re-invented on a regular basis, a core, purpose-driven story becomes a mantra, repeated often until it’s believed – whatever the context (in marketing to customers, to explain growth, to raise funds, change culture, etc).

8. Does the STORY have to reflect a Core Purpose?

Yes, always. Because “without our story, we don’t exist” (Joe Harawira, Cultural Storyteller).

The Business Roundtable of America (with 200 members including Amazon and GM) announced in 2019 a revolutionary proposal to depart from the “bedrock belief” that companies exist to serve shareholders. They expanded their remit to also include customers, workers, suppliers, and communities. A lot of organisations will be re-evaluating their stories as a result!

9. Can the STORY change how teams behave and perform?

Gianpiero Petriglieri of INSEAD says “It’s hard to follow a leader unless you believe you are sharing the same story.” In the age of AI, organisations are more like ecosystems than machines, applying systemic, test-and-learn methods. So, we need to engage people in strategy creation. Communications and engagement is no longer simply an output.

I believe successful companies in future, while they use next-generation enabling technology, will (like Starbucks) put people at their heart so they become in turn passionate advocates who help deliver change that sticks.

10. Does the STORY have to run across our organisation?

To be credible, yes. People won’t take your word for it. They’ll want proof so they can believe it. Storytelling helps create the language that shortcuts to this.

A combination of Strategic Thinking, a Systemic Approach and Applied Storytelling, can help organisations to deliver sustainable change. By that I mean change that drives meaningful growth, is operationally realistic and gives people something to unite behind. 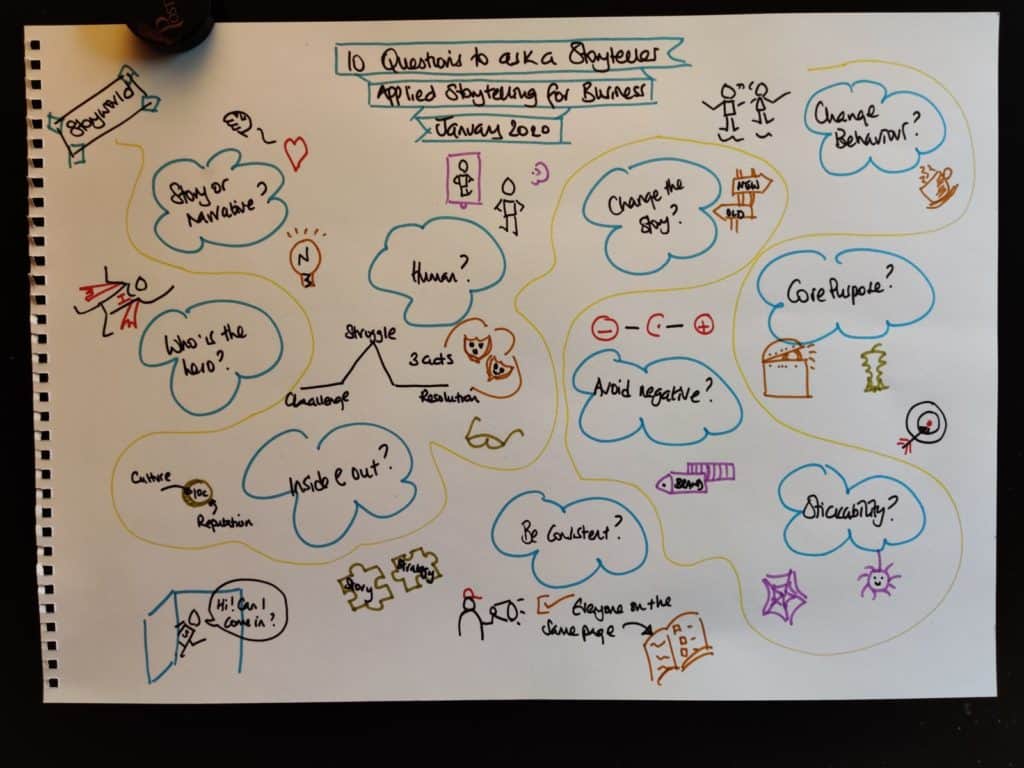 To find out more, follow Vikki at www.vibratoconsulting.com or join her session at the annual SDI conference – SDI20 – 15th-17th March 2021 in Birmingham.